Catching The Tube: Where, Why and When

In 1863, the world’s first underground railroad opened between Paddington and Farringdon. From there it would grow in scope and ambition, until it became the nervous system that connected the entirety of London. Just 150 years later, it has become one of the best metro systems in the world, renowned for the style of station and the convenience of its use.

Responsible for carrying the majority of the city’s work force, it forms an essential part of the capital’s infrastructure. The huge amount of funding that goes into the project year after year reveals just how pivotal the service is to the everyday lives of London’s inhabitants.

Covering everything from the outer fringes to the city’s inner attractions, the service currently stops at no less than 270 stations. Some of these would be isolated from the centre of the capital were it not for this remarkably expansive service and its no exaggeration to say that the tube is the glue that binds the disparate portions of London together into one great city.

Plan your Journey at TFL

Catching The Tube: Fees and Costs

The tube is a reasonably expensive way of travelling the city for those used to the buses, but it fares favourably compared to just about every other mode of transport, including the much vaunted Boris bikes. The fees are generally calculated according to what zones you are planning to travel in.

A zone is a region of London: zone 1 is the very heart of town, zone 2 is commonly known as central, zones 3-5 are the outer parts of the city and zones 6-9 are what is best known as Greater London, and includes a great deal of suburbs.

As one would expect, zones 1 and 2 are by far the most expensive, with fees there double the equivalent of the outskirts. A standard single there will set you back around 4.70, regardless of the length of your trip. Considering the close proximity of many stations in zone 1, walking or taking a bus can often be a cheaper alternative.

The other zones are considerably cheaper, however it’s highly important to note 2 things when considering tube travel in the capital. First is that the length of the journey is irrelevant and only the highest fee is applied. This means that an hours journey from zone 3 to zone 9 will set you back half the cost of a 5 min trip between 2 zone 1 locations. If you go through zone 1 or 2 on your route, even if its just for a short time, you will be charged the same as if your entire journey had been in zone 1.

The second thing to remember is that Oyster travel is considerably cheaper. For a zone 1 single, it represents a staggering saving of over 50%. Oyster cards are free (a deposit must be paid, but can be reclaimed if the card is traded back in) so there is rarely any reason to ever favour a paper ticket over an Oyster card if at all possible. Oyster cards are also valid on many inner city trains and on buses, making them an incredibly flexible means of travel payment. 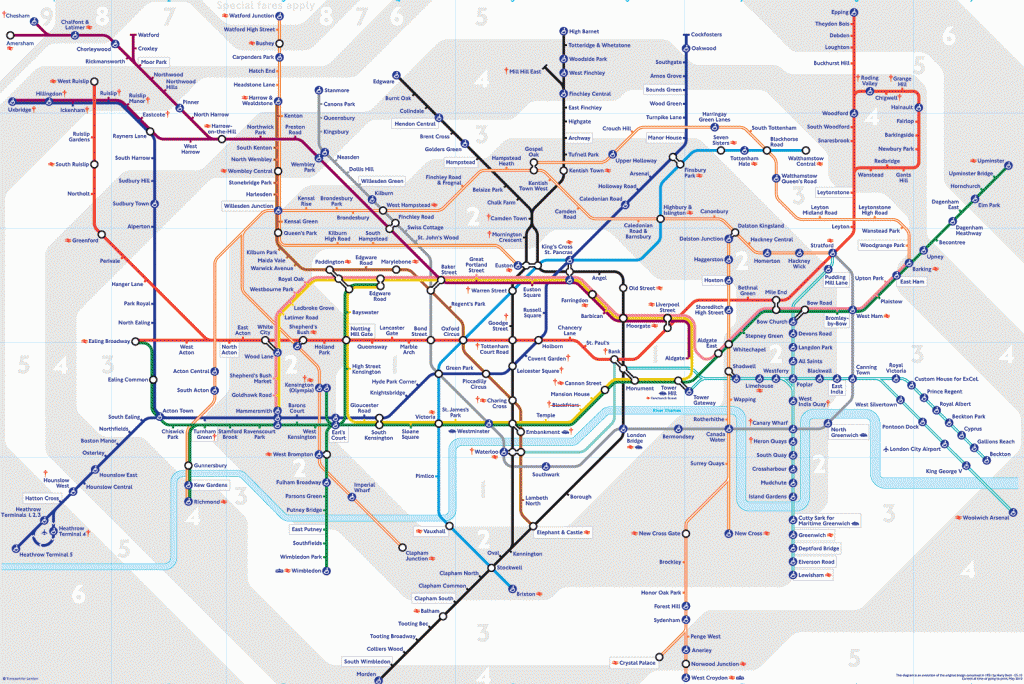 Catching The Tube: Tips and Hints

. Avoid travelling during the hours of 6am-8.30am and 5pm-6.30pm is at all possible: trains during this time are full of workers and are short on space.
. Avoid certain tubelines at rush hour: the central, northern and jubilee lines are particularly busy and getting a seat is an impossible feat before the crowds clear.
. Always check the train itself to see its destination: timetables and display boards aren’t always accurate.
. Multiple lines will often run from the same platform, so be careful to catch a train on the right line: make a mistake at Baker Street for example, and you can quickly find yourself whisked out to zone 3 instead of being taken into central.
. Checking for elevators is often not enough reassurance for disabled users, as many elevators do not run straight to the platform itself. In many cases, there are stairs or escalators that must be used. To avoid this, prioritise major rail stations like Paddington or Victoria, as their facilities are often better.
.
.
.