Top List of Tallest Buildings or Structures In London 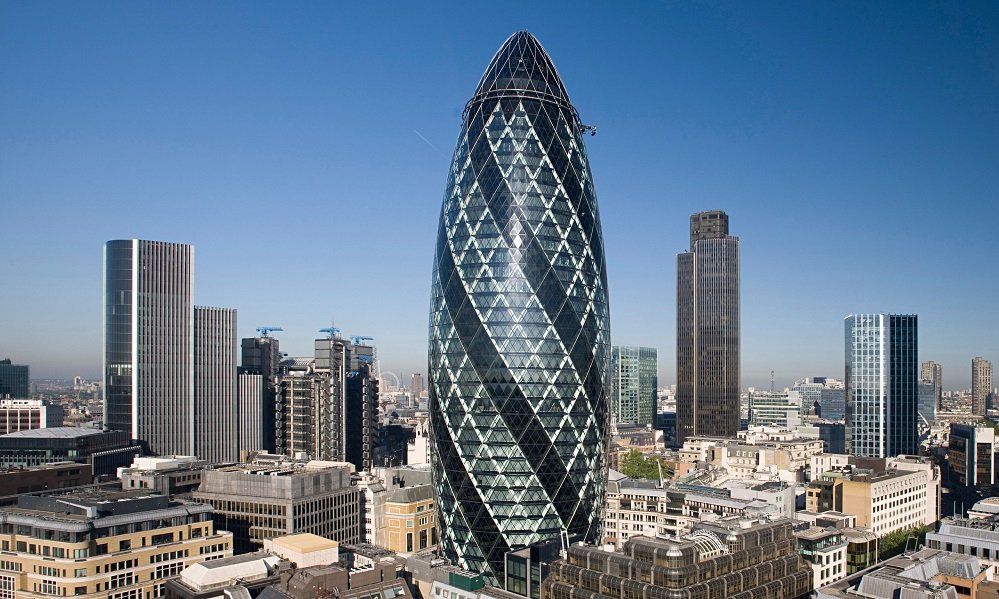 When a person thinks of tall buildings and skyscrapers, London doesn’t necessarily comes to mind immediately. However, the city does have some tall buildings with some interesting history behind them. We’ll be looking at the top tallest buildings and structures in London. The first tall structure in London was built a long time ago, which was taller than 100 meters. Of course we’re talking about the Old St Paul’s Cathedral which burned down in the Great Fire of London in 1666. Centuries later, the city kept much of its old architecture and charm, but it was inevitable that the city starts modernizing. In the 1960s London begins regularly constructing tall buildings. Centre Point was probably one of the first important tall buildings in London, which was finished in 1966. As the country’s economy kept expanding and growing, so did the city’s buildings. London’s skyline would never be the same. Today these buildings are some of London’s most crucial landmarks. Some old cities have made the mistake of building such structures in areas which were ruined forever afterwards. London has proved, however, that with a bit more planning, these large buildings don’t necessarily have to be bad and ugly. Here is our list of the tallest and most important buildings in London. 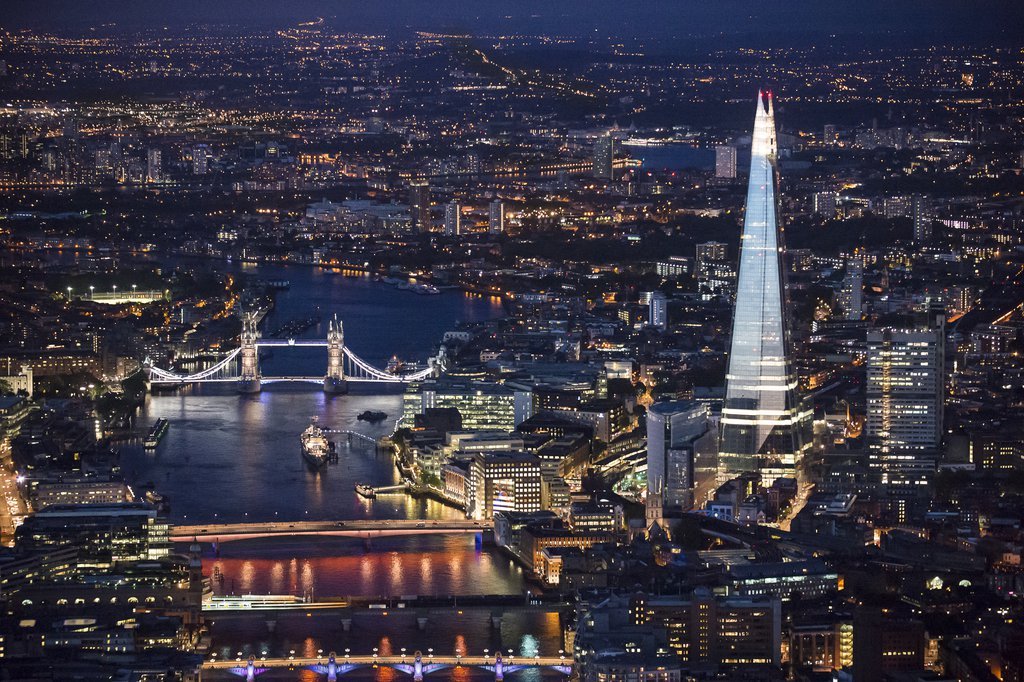 Named the shard, because of its resemblance to a shard of glass, this London building is 309.6 meters tall. Construction began in the spring of 2009, and the building was finally finished and topped off in 2012, and opened on the 6th of June. It has a total of 95 floors, and at the moment it’s the 87th tallest building of its kind in the world. The building is situated on the site where the Southwark Towers once stood. They were demolished in 2008 to make room for the more modern Shard. 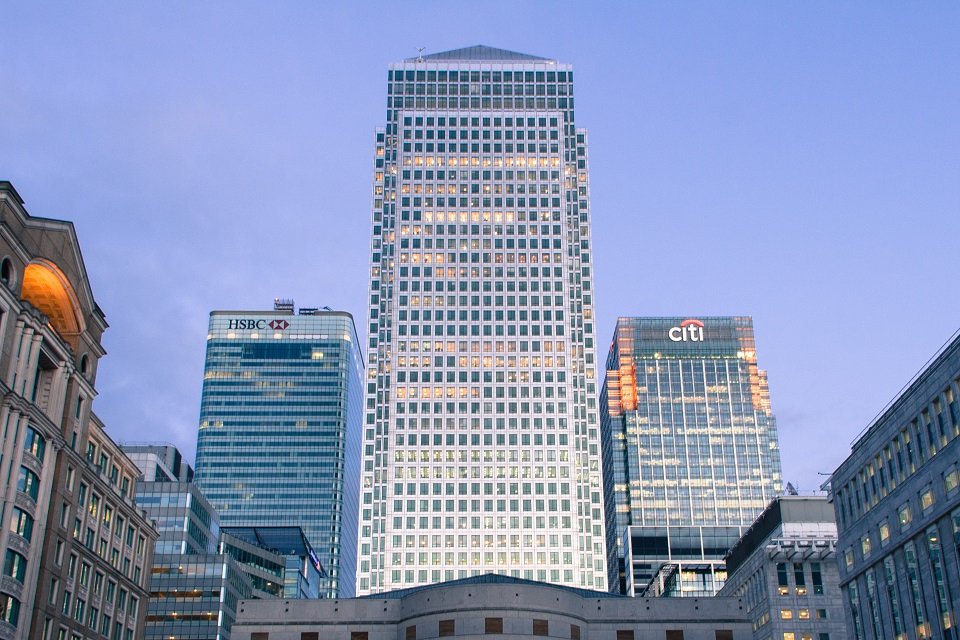 The One Canada Square is one of the most iconic office buildings in London. Since its construction was complete in 1991, it remained the tallest building in the UK until 2010. It’s 235 meters tall, and construction costs amounted to 624 million pounds. The building was designed by a prolific Argentinian architect Cesar Pelli. One of the structure’s most interesting feature is its pyramid like pinnacle. Major companies and banks have offices in the building such as HSBC, and JP Morgan. 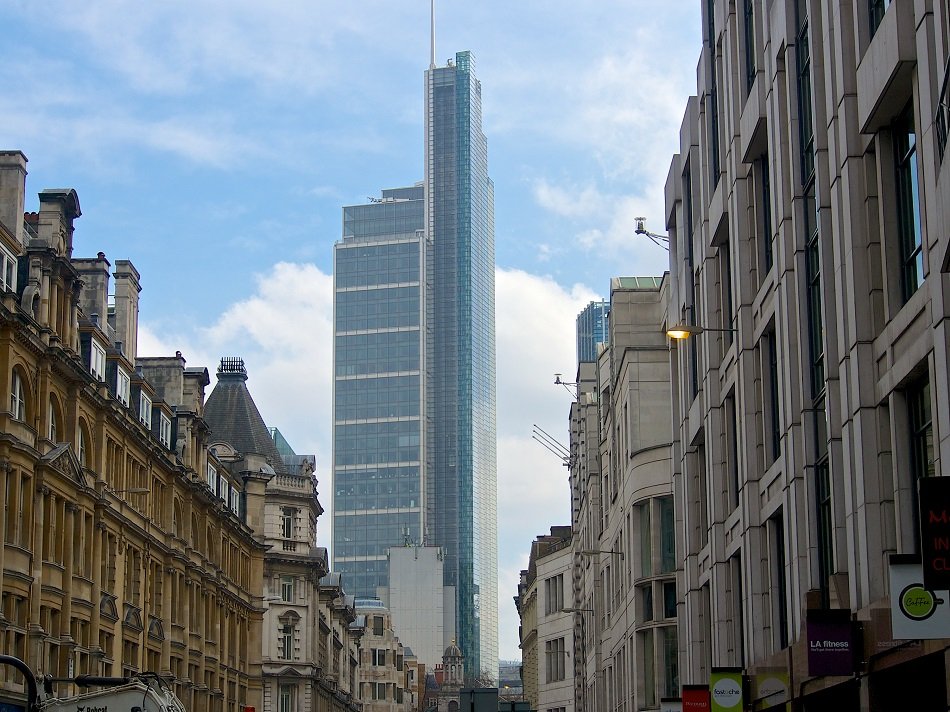 Standing 230 meters tall, with 46 floors is the Heron Tower, one of London’s nicest office buildings. Among its neatest features is a massive aquarium in the lobby that holds 70,000 liters of waters and numerous species of fish. Work on the building began in 2007, and it was finished in 2011. Because of the global financial crisis, in the beginning the building struggled to get enough tenants, but today 90% of the space is successfully rented out. 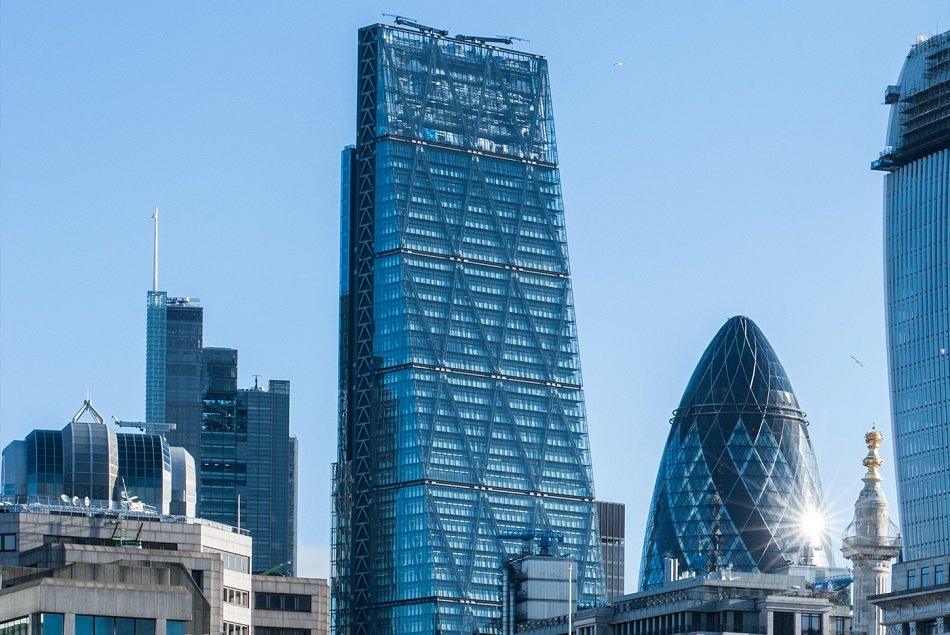 Also often referred to as the “cheesegrater” because of its distinct shape, the Leadenhall building stands 225 meters tall. The building was finished in 2013, but the official opening of the building only happened in 2014. Estimated cost of construction was 286 million pounds. Unlike the Heron Tower, Leadenhall managed to attract tenants almost immediately, with Aon occupying the first ten floors of the building. The building was completely designed by the prolific Rogers Stirk Harbour + Partners firm. 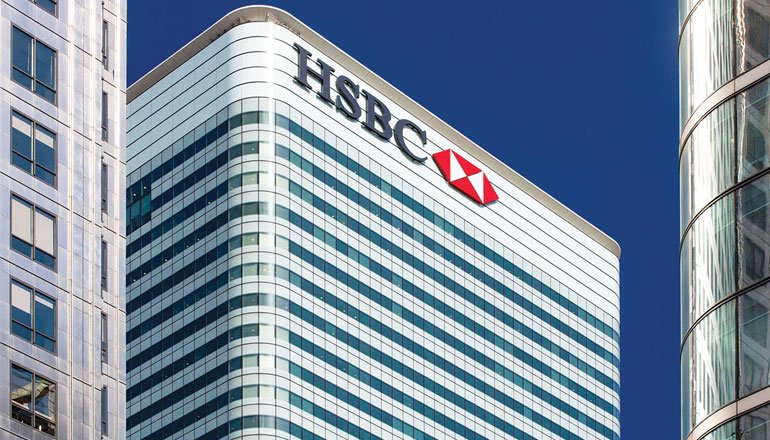 This is the first building on the list which is completely occupied by single company, the HSBC bank. Not only that, but it’s the main headquarters for this major bank. The building itself is 200 meters tall. Construction began in 1999 and it was finished fairly fast seeing as it was done by 2002. The building has over 100,000 square meters of office space, and it’s made out of a staggering 180,000 tons of concrete. A major bank deserves a major building! 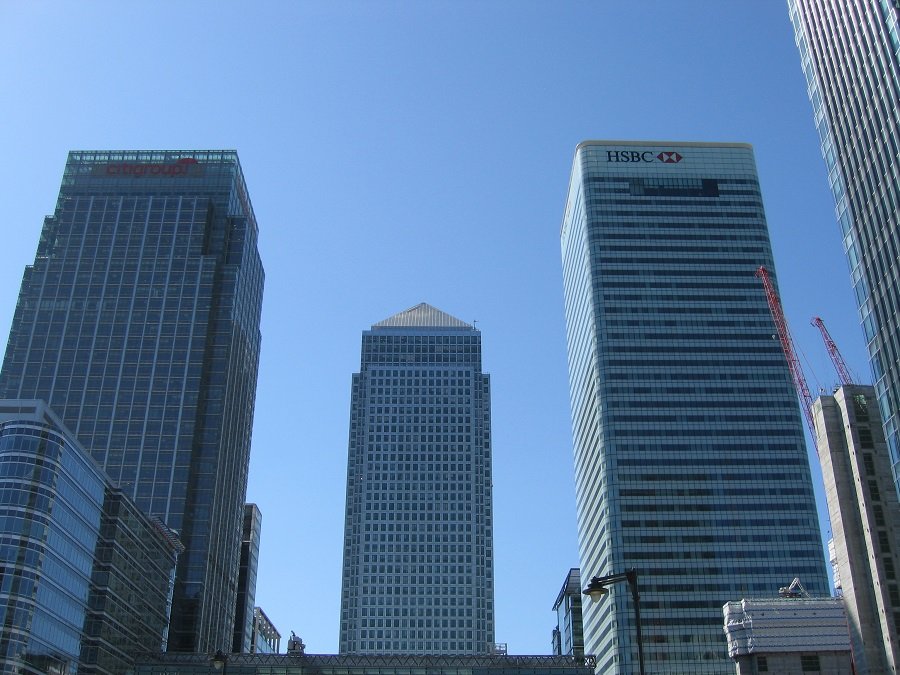 Stretching up exactly 200 meters in London’s Docklands, near to the previous building on our list, is the Citigroup Center complex. The building was actually merged with the neighboring one, 33 Canada Square. It took three years for the taller building to be completed and construction began in 1999. This one was also designed by Cesar Pelli. Tenants of the building include HSBC, Regus, SUMCO Corp, AMTEK, and many others. 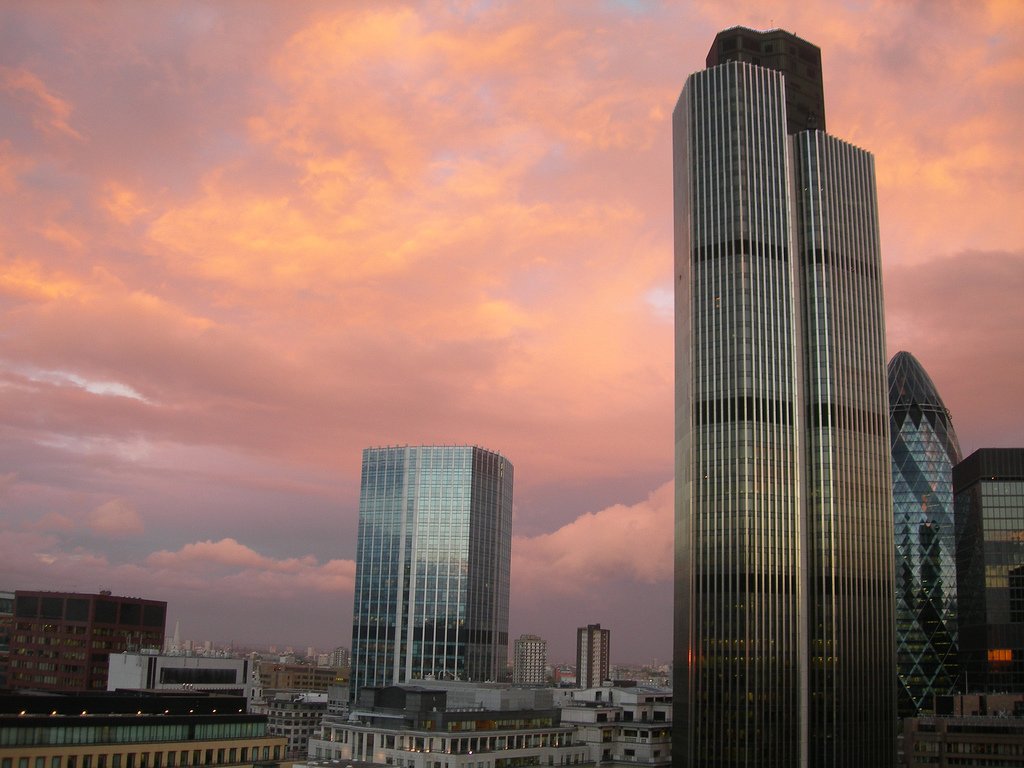 This addition to the list is the third tallest building in the city. Construction lasted nine years, from 1971 to 1980. On June 11th 1981, the Queen herself officially opened the building. It’s 183 meters tall, and at the time it cost 72 million pounds, which is more than 250 million today. From a birds-eye view, the shape of the building was made to look like the logo of the NatWest company. In 2011 the building was sold for more than 280 million pounds. 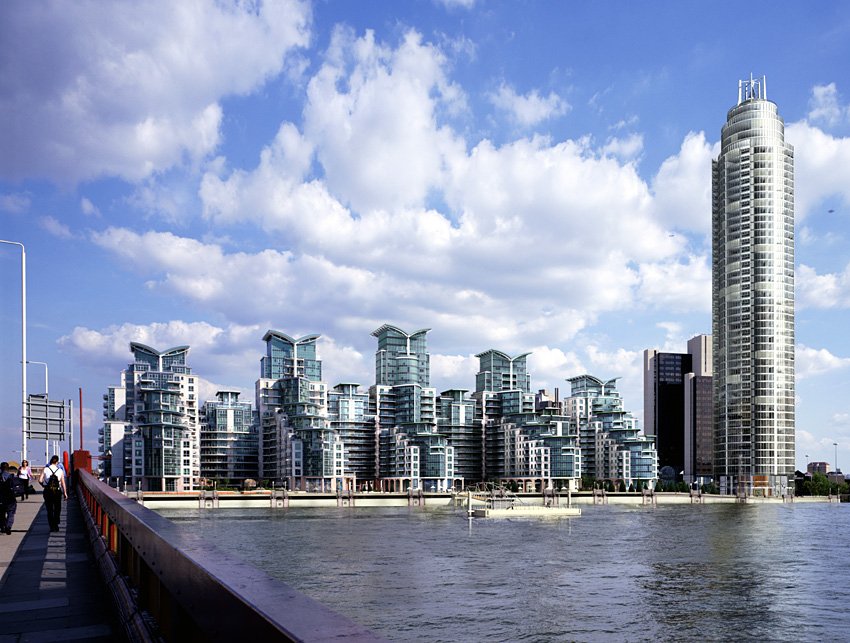 The St George Wharf Tower is the tallest residential building in the British isles. Also known as the Vauxhall building, it was finished in 2013. It is exactly 181 meters tall and it consists of 52 floors. One of the main features of the building is a wind turbine that’s built into the structure which created additional energy for a building of this size. It was designed by a firm called Broadway Malyan.

Also referred to as the Gherkin, this might be one of London’s most beautiful skyscrapers. It’s situated in the affluent financial area of the city. The Gherkin was finished in 2003 and opened in April 2004. The futuristic design of the Gherkin building is unlike anything Londoners have seen before, and this is why it has become something of a landmark. The building cost 128 million pounds, which includes land fees and cost. The ne-futuristic London building is 181 meters tall. 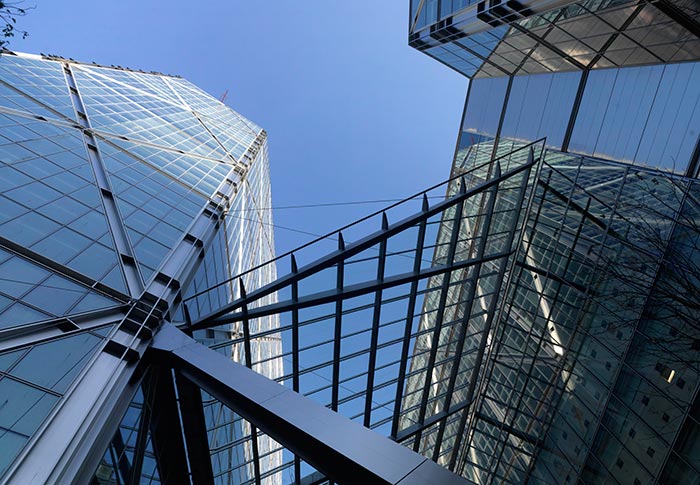 This is another building that’s right in the middle of London’s financial district. Construction lasted for four years, from 2005 to 2009. It was built at an estimated cost of 240 million pounds. The tallest point of the building is 165 meters, and the tenants include Regus, Henderson group, Itochu, and others. From an architectural standpoint, the beaming is very similar to the Hong Kong Bank of China tower.