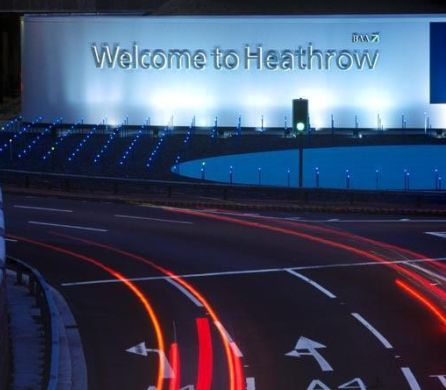 London Heathrow is one of the capital’s busiest airports. First opened back in 1929, it’s gone from a humble airfield to London’s travel hub in under a decade. Connected via the tube to the centre of the city, it’s the choice of most tourists and locals alike when it comes to aviation, and is often considered by many to be the best out of the 3 major airports serving the city. Travel to London Heathrow airport is simple and efficient, making it the obvious choice for most.

Heathrow is particularly well known for the extensive array of facilities that it provides. Unlike many airports who are relatively basic in their accommodation of passengers, Heathrow is virtually a whole town in itself. Restaurants, manned by acclaimed chefs and complete with innovative menus are the norm, whilst fast food chains have branches bigger than their flagship stores in the capital’s centre. Countless shops line the walkways and what can accurately be called streets of the commercial sections. Were it not the artificial glow of the lighting fixtures, it would be easy to believe that you were in a trendy shopping destination rather than an airport departure lounge. Those that want to relax can indulge in a massage or go and have some aroma therapy. Drinkers looking for a bit of fun can head to one of the hip bars to sample a great cocktail. Anyone just killing time can amuse themselves at arcades, bookshops, internet cafes and more.

With such excellent facilities available, it’s not hard to see why Heathrow is the 3rd busiest airport in the world. The amount of people passing through it each and every day is gobsmackingly high, and often reaches well into the tens of thousands. More than 100,000 jobs are sustained purely by its existence, and its continued popularity means that they won’t be disappearing soon. If anything, it will only get bigger, as both public demand and technology are looking to increase in the coming years. Some experts estimate that a host of new terminals will be needed to satisfy tourist and commercial needs, and Heathrow may one day take the top spot for most used airport in all of the world.

Getting to London Heathrow Airport

Travel to London Heathrow airport is extensive and relatively simple. As one would expect from an airport of this size, it has considerable transport links. They run night and day so, whenever a flight arrives, passengers will be treated to a wide variety of transportation options. Travelling back into the city itself is usually the easiest option, although more limited services run to the surroundings areas and to other parts of the country.

Coaches arrive at least once an hour, bound for the centre of London. They’re usually the cheapest option, although their occasional tardiness can be offputting to some. We recommend them for anyone who isn’t in a rush, as the savings are large and the service fairly comfortable.

How to Get a Taxi to Heathrow Airport?

For those wanting a quick and precise pickup, taxis are ideal – Get a Taxi to Heathrow Airport. With them there’s no great walk home from the station, no wait, no other people. The driver simply picks you up and takes you exactly where you need to be with a minimum of fuss. The downside of course is the cost: such a personal service doesn’t come cheap. Fees are generally cheaper in the day, but they’re consistently high regardless of time.

The tube also runs to Heathrow, opening up a world of possibility. The obvious downside is that the service here is much less precise, and will often involve walking to other locations or changing trains.For those with energy and light bags, it’s pretty much the ideal way to travel to London Heathrow airport