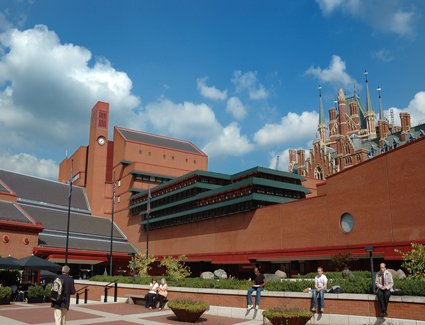 Established in the year 1973 on the 1st of July, according to the British Library Act 1972, the British Library is the National library of the United Kingdom. Previously the library was a section of the British Museum along with the bulk holdings of the new library that consisted of smaller libraries such as the National Lending Library for Technology and Science, the British National Biography and the National central Library. This amazing library holds about 150,000,000 total items that include 351,116 manuscripts that, which are both in singles and in volumes, 824,101 philatelic items, 1,607,885 music scores, 3,000,000 sound recordings, 4,347,505 cartographic items, 8,266,276 philatelic items, 13,950,000 books.

The British library stands as the World’s largest library in the world for the most voluminous, while the second most sizable voluminous library of the world is the Library of Congress of the United States. The library primarily exercised the Office for Scientific and Technical Information in the year 1974, later in the year 1982 the HMSO Binderies and the India Office Library and Records became a constituent of The British Library. The next year in 1983 the National Sound Archive had become a division of the British Library as the Archives consisted of over thousands of tapes and millions of discs that had recordings of Video and Sound. The Library’s collection was scattered throughout central London’s various buildings such as Chancery, Bloomsbury, Holborn and Bayswater in an interlibrary that leads to Boston Spa, the newspaper library at Colindale and Wetherby towards the West Yorkshire that is situated on the Thorp Arch Trading Estate, North-West London.

The British Library of London was constructed on the site Euston Road after a long haul campaign that was led by Dr. George Wagner, next to the St. Pancras railway station, after overthrowing its initial plans or ideas of demolishing the swath of streets that lay just in front of the museum being an integral part of the Bloomsbury and reconstructing the library on the seven acres land so that the museum would be directly opposite its previous home. The St. Pancras building is the biggest public building that has been constructed in the 20th century with the basement that extends 24.5 meters in depth. The whole area of the floor covers over 112,000 sq meters that is spread for over 14 floors as 5 of the floors are below the ground level and 9 of them above ground level. The complete building consists of 10 million bricks and concrete weighing 180,000 tonnes. The Boston Spa Building was previously an ordnance factory which was specifically redesigned for the document delivery of service process. The collection at the Boston Spa houses a collection of over 100 KM and is devoted to inter library loan

Comprising of over 150 million items and expanding everyday The British Library is the largest ever know in the world. The collection of historical significance is based by the acquirements and the donations sequence since the 18th century, these accumulations are known as the “Foundation Collections.” The Foundation Collection consists of the manuscripts and volumes of Sir Hans Sloane, Robert Harley and Sir Robert Cotton along with the accumulation of the Kings Library of King George III that also included the Old Royal Library which was a donation from King George II. At present the library includes Treasures like the Magna Carta, Lindisfarne Gospels, Leonardo da Vinci’s Notebook, 18th March 1788 The Times edition, manuscripts from the Beatles and the “Trial Speech recording of Nelson Menda.” the Holdings such like the today’s newspapers and the Chinese oracle bone materials of over 3, 000 year old, along with 60 million patents, maps over 4 million, journal titles over 260,000, and Jane Austen to James Joyce and Hadel to the Beatles that consists of 310,000 manuscript volumes. Containing nearly 57 million records you can explore the abundance information of the online catalogue of the digital collection as it can be accessed to view, search and order items from this magnificent collections that includes over 800 databases, 40000 e-journals and many other electronic resources. Most of the library’s collection is accessible to registered Reader Pass holders at St. Pancras. The reading rooms of the library is accessible to anyone who has bona fide need for the use of the collection. For people who carry out research can gain access by registering for a Reader’s Pass by furnishing cogent evidence of their address and signature for obvious security reasons. The Reader’s Pass would be also accessible to historical collection for those who only use materials specialized which are not available in other academic libraries and public. 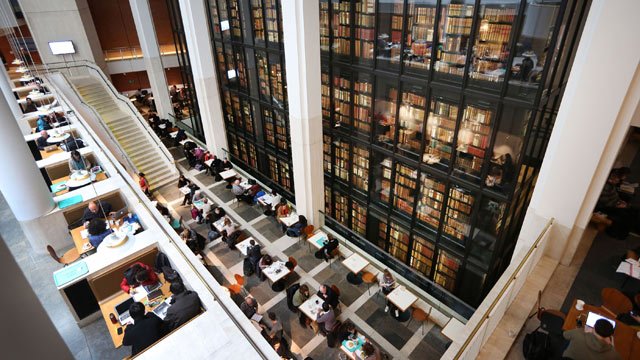 Apart of being an abode to the some of the substantial literary treasures in the world we know today the British Library prides itself with four wonderful eateries by Peyton & Byrne from within an excellent abundant restaurant. There are about five locations where you can refuel and relax at The British Library Offering everything for the studios academic and passing visitors could ever want is the Peyton & Byrne main attraction the King’s Library restaurant on the first floor from sunrise to the sundown as its servers anything from the mouth-watering breakfasts to freshly prepared luncheons and noontime tea from 3pm onwards. On the upper ground floor you will have a counter service which serves Peyton & Byrne pastries, salads, lunch-time soup, tea, coffee and softdrinks and for the British Library’s friends and readers you will have the Cotton Room. On the 3rd Floor you will find The Last Word which is a Lounge that has a vending machine which serves drinks and snacks. On the Piazza you can relax in the Espresso Bar as it is counter served with a provision to sit outside or inside. The espresso bar near the Euston Road offers sandwiches, freshly roasted coffee and freshly prepared hot churros, Peyton & Byrne pastries, cakes and softdrinks with a provision to sit inside or sit outside.